Amur honeysuckle (Lonicera maackii) seems to grow EVERYWHERE—maybe that’s why it’s considered an invasive species in several areas of the U.S. Ironically, although native to Japan, it’s on the endangered list there.

Its blooms are beautiful and their fragrance is intensely sweet and aromatic. It also produces red berries that the birds feed on in the fall. I like it, but it needs to be kept in bounds or it will take over!

In my post to “Daily Log” on 24 April 2022 I wrote about the Nine Year Plan that started last month. It is the latest in a series of plans that punctuate the timeline of the Divine Plan which I introduced in my posting on 10 April 2022.

The diagram below lays out the Nine Year Plan on a timeline along the x-axis that shows an s-curve for each year of the Plan. Annual Ridván messages from the Universal House of Justice describe the goals for each year. 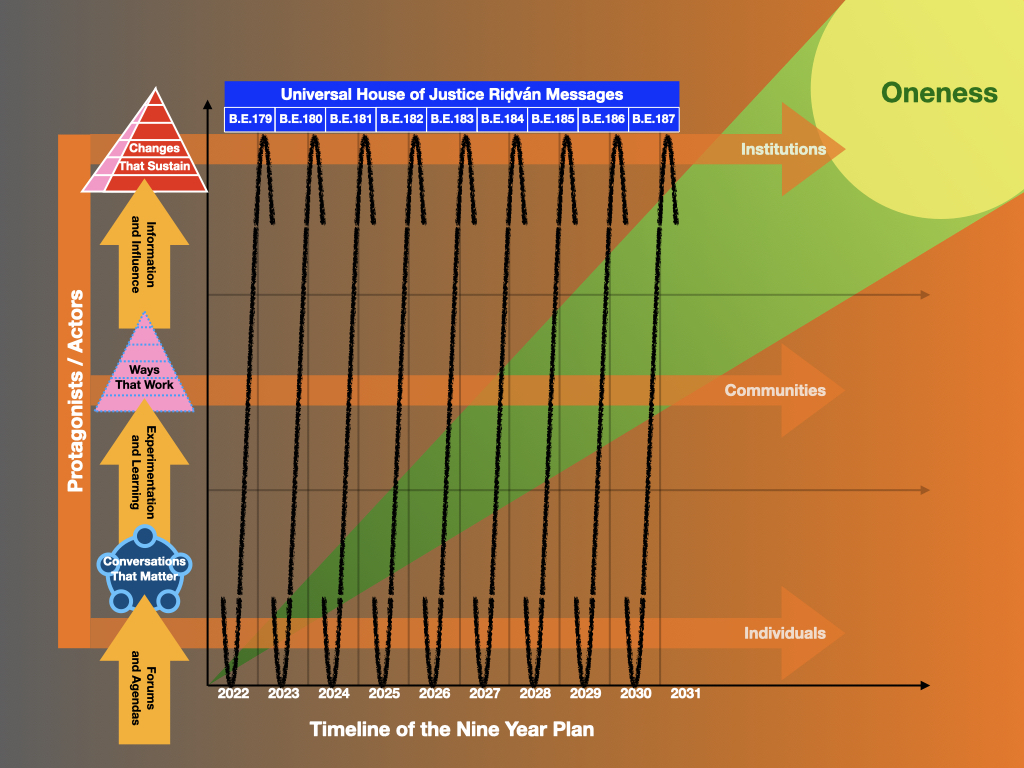 Repeated involvement in the three-step change management process along the y-axis cycles channels the energy and creativity of individuals, communities, and institutions toward the achievement of those goals. It never fails!

Creation is the expression of motion. Motion is life. A moving object is a living object, whereas that which is motionless and inert is as dead. All created forms are progressive in their planes, or kingdoms of existence, under the stimulus of the power or spirit of life. The universal energy is dynamic. Nothing is stationary in the material world of outer phenomena or in the inner world of intellect and consciousness.

Religion is the outer expression of the divine reality. Therefore, it must be living, vitalized, moving and progressive. If it be without motion and nonprogressive, it is without the divine life; it is dead. The divine institutes are continuously active and evolutionary; therefore, the revelation of them must be progressive and continuous. All things are subject to reformation. This is a century of life and renewal. Sciences and arts, industry and invention have been reformed. Law and ethics have been reconstituted, reorganized. The world of thought has been regenerated. Sciences of former ages and philosophies of the past are useless today. Present exigencies demand new methods of solution; world problems are without precedent. Old ideas and modes of thought are fast becoming obsolete. Ancient laws and archaic ethical systems will not meet the requirements of modern conditions, for this is clearly the century of a new life, the century of the revelation of reality and, therefore, the greatest of all centuries. 1