I transplanted this bull thistle or Scottish thistle (Cirsium vulgare) from the edge of the driveway where it emerged as a volunteer last spring, to a “safer spot” in the fence line garden. It must have been OK with its new digs because it’s now blooming: 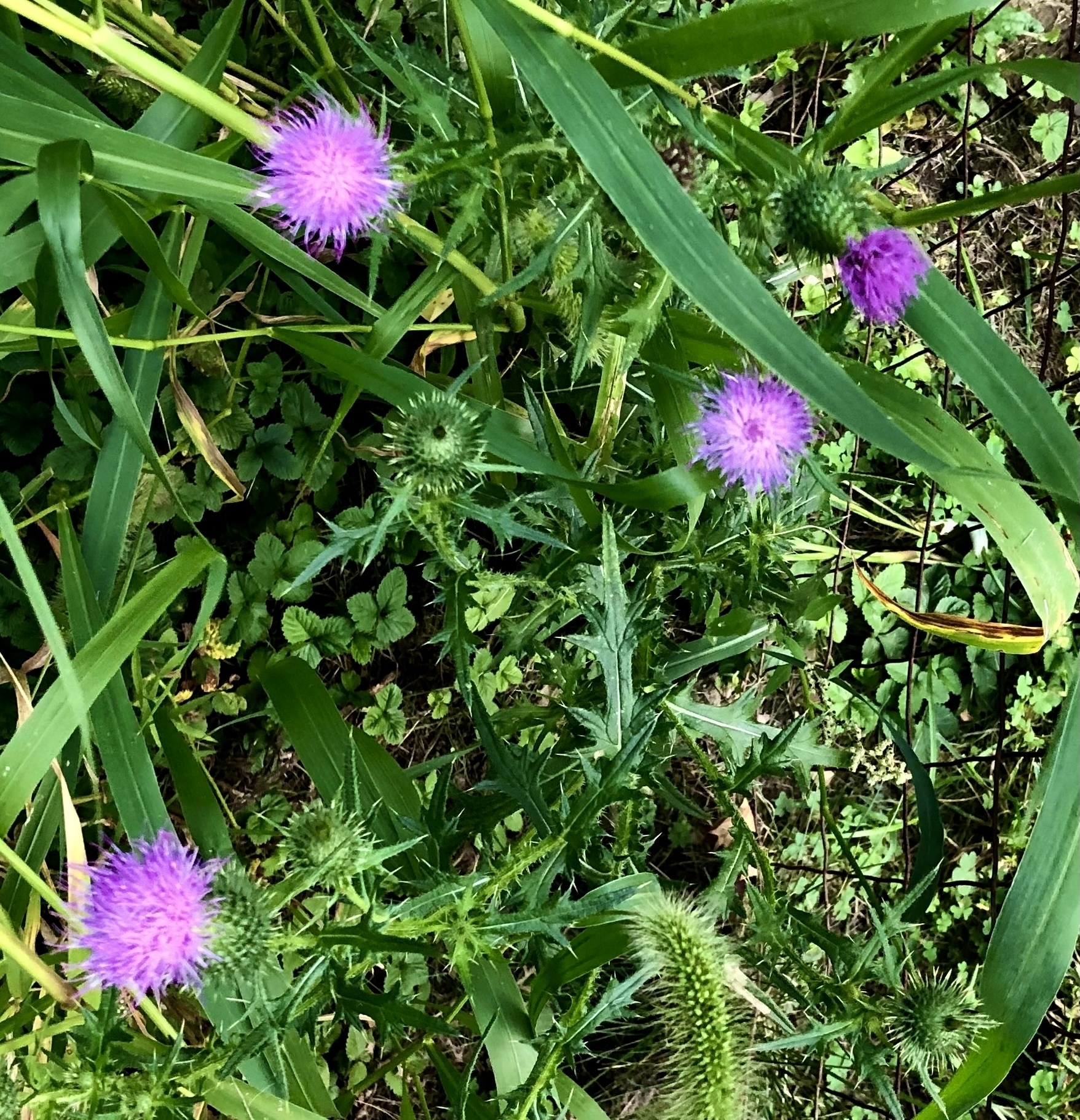 Just in time, too, as it marks another remembrance of the Queen who passed away in Scotland where this particular variety of thistle is the national flower.

In further exchanges with Franz Nahrada, I agreed to help him advance his book project about the Global Villages Network. In his public DorfWiki page, Fragen An Die Community, he outlines some of the points he wants to explore. While I was roaming around the DorfWiki site, I found a profile page he setup for me when we collaborated on another set of topics some 15+ years ago. I may use it as a starting place for my input into what he has in mind. We’ll see…

Corresponded with Beedy Parker, who’s a core team member on the “How’s The Weather?” initiative. The main theme of our exchange concerned timebanking and more specifically how the concept has evolved over the decades since Edgar Cahn launched the current iteration in 1995 with the formation of the Time Dollar Institute.

Building on the The 5 Core Values of Timebanking, I shared what I see as the three stages of timebanking:

Back in the day, if you, as a timebank member, did whatever service you offered in response to a request from another a timebank member, you would login to your account online and transfer the time you spent from the other person’s account to your account. Then you could transfer that time in your account to another timebank member for the time they spent doing something you requested. Simple, but a lot of administration—stuff that a lot of people don’t like to do or feel comfortable doing since it requires going through multiple steps on several webpages.

Over the past decade, the purpose of a timebank has evolved to include projects, each with multiple associated tasks, that members of the timebank complete and document the time they spend doing them. This goes beyond the original function of the timebank in two very significant ways:

2) It documents the progress of a project as it proceeds to completion—it establishes a demonstrated capacity to accomplish complex endeavors.

Together, these underscore the range AND depth of capability within a timebank community AND they serve to mitigate risk of failure should the community consider future projects of similar complexity and consequence. They can also serve as “collateral” should the community opt to pursue grant money or secure a loan.

More recently, the purpose of a timebank stands on the brink of taking yet another leap in purpose — to go beyond competencies and time dedicated to task completion to one of recording human value as expressed by the whole person for the entire day. Let me explain. In my experience, I don’t just think about a task or project just when I’m focused on it. It’s streaming in the back of my mind for hours on end. And I don’t just have one stream running at a time, there are multiple streams flowing concurrently, often interrelated in ways I don’t even realize at the time until that magic “Aha!” moment when I’m greeted with another insight. In my opinion, people should be credited for 24 hours each day of their lives. The allocation of that time to various activities happens seamlessly in the background by drawing upon the data generated from whatever platform(s) we participated in during that day. Doing so captures far more of the real value people generate every day. If 8 billion of us were on such a system, few problems would be remain unsolved.

Next, update the GAVNet TimeBank home page to reflect this theory so it can be put to the test. Admittedly, it is getting more complicated and dense by the day ;-)

The necessity of education for all mankind is evident. Children especially must be trained and taught. If the parent cannot afford to do this owing to lack of means, the body politic must make necessary provision for its accomplishment. Through the broadening spirit of education illiteracy will disappear, and misunderstandings due to ignorance will pass away. 1