I like the new layout of the Florida room. This corner is a great place to take some down time: I have several outdoor tasks that need to be done before colder weather arrives by the end of this month. Changed my daily routine to do them in the afternoon for aerobic exercise rather than walk a mile at dawn. Day one went OK. We’ll see if I can stick with it…

Astral Prospecting on Instagram: Artist’s Conk but I could be wrong! 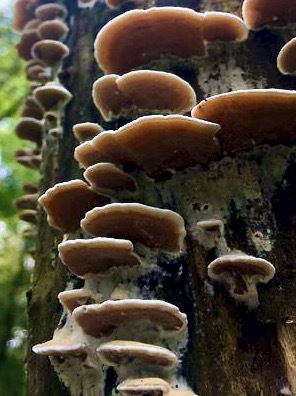 The Bahá’í writings explain that spiritual forces are the foundation of reality, the fundamental basis of life. From a Bahá’í point of view, spirit or spirituality is not just one dimension of human life, it is the motivating impulse of existence, without which nothing can live or move. ‘Abdu’l-Bahá uses the image of the sun to illustrate this. Just as the sun is the source of physical existence, the Word of God is the source of human life and civilization. After pointing out that no life would be possible without the warmth and light of the sun, He goes on to say:

Likewise, in the spiritual realm of intelligence and idealism there must be a center of illumination, and that center is the everlasting, ever-shining Sun, the Word of God. Its lights are the lights of reality which have shone upon humanity, illumining the realm of thought and morals, conferring the bounties of the divine world upon man. These lights are the cause of the education of souls and the source of the enlightenment of hearts, sending forth in effulgent radiance the message of the glad tidings of the kingdom of God. In brief, the moral and ethical world and the world of spiritual regeneration are dependent for their progressive being upon that heavenly Center of illumination. It gives forth the light of religion and bestows the life of the spirit, imbues humanity with archetypal virtues and confers eternal splendors. This Sun of Reality, this Center of effulgences, is the Prophet or Manifestation of God. Just as the phenomenal sun shines upon the material world producing life and growth, likewise, the spiritual or prophetic Sun confers illumination upon the human world of thought and intelligence, and unless it rose upon the horizon of human existence, the kingdom of man would become dark and extinguished. 1

Far more than holy scripture to be read and left upon a page, the Word of God is the source of light and life and separation from it is darkness and death. …It is the reality of the Manifestation of God, His power pervading the world, which creates and shapes the individual and gives life to humankind. 2